We produce Monteti and Caburnio, two reds, and TM Rosé

They are both classified as IGT Toscana, to fully second the characteristics of the soil, allowing us to choose the grape varieties best suited in absolute freedom, pursuing low yields per hectare and drawing up our own vinification and ageing method, which we apply with the utmost rigour and refine year after year.
While sharing a similar stylistic concept, they are different in terms of composition and maturation.
Every vintage of both wines aims to draw the best from the climatic development of the season and the response of nature. Therefore, every vintage, being built on solid foundations, has its own story to tell.

Monteti is our flagship wine. It is named like the estate after the hill that protects our vineyard from the strong Mediterranean winds guaranteeing an ideal microclimate thanks to which our vines can benefit, protected, from sea proximity.
It is a blend of Petit Verdot (with percentages varying depending on the vintage from 40 to 55%), Cabernet Franc (between 30 and 25%) and Cabernet Sauvignon (between 15 and 20%).
It matures for 18 months in medium-toasted French oak barriques, 70% of which are new. This is followed by further 2 years of bottle ageing before being released onto the market.

With Monteti we seek the personality of the Maremman territory subjected however to the complexity and elegance of a great wine. Petit Verdot is the personality, the rebel horse, Cabernet Sauvignon conveys structure and longevity and Cabernet Franc is the feminine element that embraces and softens both.
With Monteti we seek a wine with a “reverse spoon” sensorial trend: with a gentle, attractive entry followed by a full expansion and a long finish.

Caburnio is our other, not second, wine. It is named after a spelling mistake in the transcription of a passage of the Natural History by Pliny the Elder, written between 23 and 79 AD, in which, in the illustration of winegrowing in Roman times in the province of Gallia Narbonensis, “vitis Caburnicam” appeared by mistake instead of “Narbonicam, Narbonensis”.

“In the last seven years, a vine which buds in a single day and is therefore very strong, has been introduced in Alba Helvia; it is called Caburnicam and is planted today all over the province.”

It is made of Cabernet Sauvignon (from 60 to 50% depending on the vintage), Alicante-Bouschet (30-20%) and Merlot (20-10%).
For 12 months, 50% matures in steel and the other 50% matures in barriques and tonneaux made of medium-toasted French oak, only 25-30% of which are new.
It then spends another 12 months in the bottle before being released for sale.

It is a complex yet fresh wine and it is very drinkable.

TM Rosé was born in 2014. A small production of a fresh and delicate rosé of a pale onion-skin colour, with a gentle structure that makes it perfect both for “aperitivo” and to accompany fish and seafood dishes. Our homage to the nearby sea.

It is composed of 80% of Merlot and 20% of Cabernet Franc early harvested from sunrise to noon. The grapes are softly and briefly pressed, then ferment in stainless steel vats at low temperature to preserve freshness and aromas. Cold tartaric stabilization at -5° before bottling. 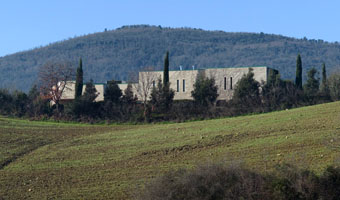